Often in our lives we come upon difficult situations. We pray that God will handle these issues. We have faith that He will. We hope that He will. We wait on Him. But He seems to take His time. In the meantime we’re left waiting on progress or healing. We’re left waiting on a word from God or a display of His power and love. Often that is the plight of the believer. To wait on God.

Such was the case with the Israelites after they were freed from Egypt. Their leader Moses went before the LORD on Mount Sinai to receive instruction for the newly liberated Hebrews. They had just seen God’s power through 10 different plagues against the Egyptians. They had just seen God’s power as He parted the waters and they walked through the Red Sea. Afterwards they were waiting on Moses to come back with a word from God so they could make their way to the land promised them by God. They waited. And they continued to wait. I believe knowing that the promised land lay before them made them anxious and impatient. Their impatience with God caused them to commit a heinous sin, idolatry. They created a golden calf and began to revel and party. Why would they do this? Didn’t they know that a golden calf had no power? I think they knew this but since they didn’t hear from God when they wanted to they chose to make a god that they could see. They couldn’t see what they wanted to see when they wanted to see it so they created something they could see. So when they felt abandoned by God they turned to the ways of the land they had just come from. The Israelites were in Egypt for 400 years. They saw the idols of the Egyptians, some may have even dabbled in the Egyptian idolatry. But when they were freed from Egypt they still had some of Egypt left in them.

We can be guilty of the same thing. In God’s “silence” we turn to those things that we remember satisfied our flesh before we were delivered. But the Bible says it’s like a dog returning to its vomit. God delivers us from sins because only He can truly and wholly satisfy us. His provisions are more than anything we can ever imagine.

The same was true for Abraham and Sarah. God had promised that they would have a child. But the years went by and God had not moved yet. So they created their own answer by committing another heinous sin, adultery. They couldn’t see the child promised to them by God so they took the wrong path to make one they could see. 25 years went by between the time of the promise to the fulfullment of the promise.

Before the Israelites went into Egypt, Joseph was a picture of what to do when God seems distant. His brothers sold him into slavery when he was 17. As he worked as a slave he was falsely accused by his master’s wife and thrown into prison. But the Bible tells us four times (Genesis 39:2,3,21,23) that all this time “the LORD was with Joseph”. Knowing that, Joseph remained faithful in whatever he did. He was ultimately taken from prison and made an official to the Pharaoh…13 years after being sold by his brothers. Joseph endured a lot but he continued to patiently wait on God. How many of us would have given up way before then?

In our human experience, we have only a limited finite grasp of eternity. We can’t see what God sees. God sees the beginning and the end of all situations. Someone has said they were are like characters in a very extravagant painting. We can only see the spot that we are in but God sees the entire painting all at once. As scripture says “one day is with the Lord as a thousand years, and a thousand years as one day.” 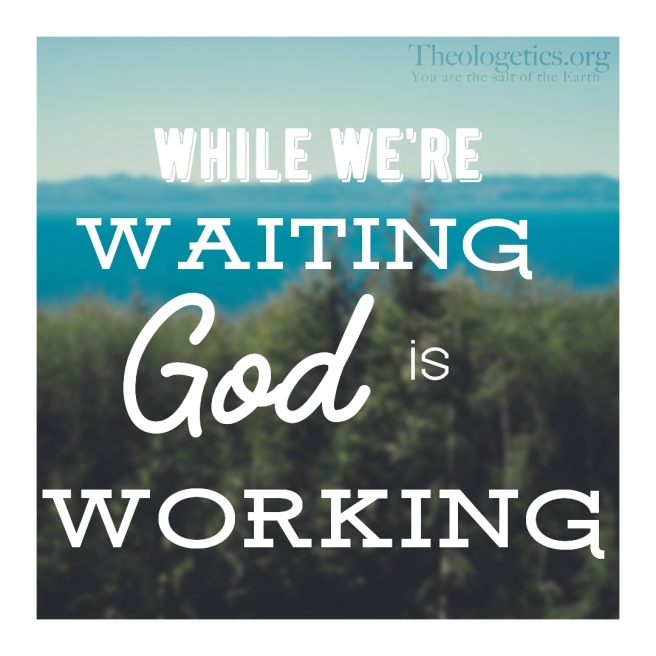 God is always working while we are waiting. The Hebrews were waiting on Moses because he was talking to God. Neither he nor God had abandoned his people. God was doing a work and His people should have been patiently waiting on what He was doing. It’s the same with us. While it may seem God has not moved in whatever situation we are in, we can be confident that He is working all things together for our good. The worst thing we can do is try to get ahead of God and make things happen that He hasn’t condoned or that He just plain hates. We then take our faith away from God and put it on ourselves. And anyone who has ever made one mistake (that’s all of us) knows that we cannot compare anywhere close to a perfect God.

2 thoughts on “When God Takes Too Long”

Theologetic Table of the Evidence

Be The Salt Of The Earth

Join other writers from various walks of life who have submitted topics of discussion or papers they have written to add to our site. Click HERE and help spread the news of Jesus through sound theology and apologetics today.