One common objection to newer Bible translations like the NIV is that some verses appear to be missing. And when compared to the King James Bible, there are missing verses. One such list that I saw on social media stated the following verses were missing from modern translations. 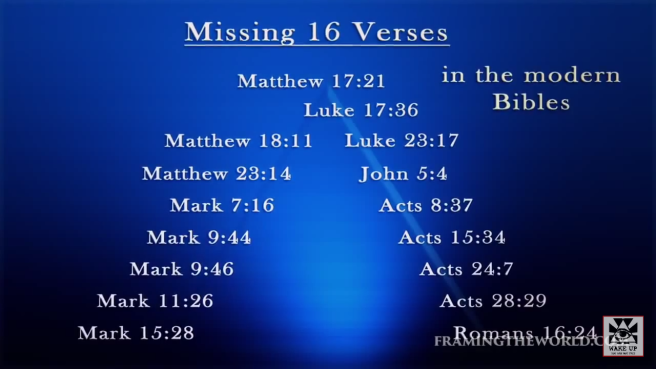 Now, my purpose here is not to argue if the verses are omitted in the original manuscripts or even why they are omitted in modern translations (Biblical scholars have agreed that newer translations have omitted many verses that the KJV included because older and more reliable manuscripts that have been found after the KJV was written do not have these verses. http://www.gotquestions.org/missing-verses.html). I also do not intend to recommend one version over another. My reason for writing is to dispute the claim that modern Bible translations purposefully omitted the messages these passages would have otherwise conveyed. In fact, often the same phrase is found and included elsewhere in the Bible.

So let’s put these verses to the test. For this blog I will be comparing the King James version to the New International version. The verses in italics are omitted from the NIV but included in the KJV. The bold verses are included in the NIV.

Luke 23:17 (omitted)
For of necessity he must release one unto them at the feast.
Matthew 27:15 (included)
Now it was the governor’s custom at the festival to release a prisoner chosen by the crowd.
(Also included are Mark 15:6 and John 18:39)

Matthew 23:14 (omitted)
Woe unto you, scribes and Pharisees, hypocrites! for ye devour widows’ houses, and for a pretence make long prayer: therefore ye shall receive the greater damnation.
Luke 20:47 (included)
They devour widows’ houses and for a show make lengthy prayers. These men will be punished most severely.
(Also Mark 12:40)

Matthew 17:21 (omitted)
However this kind does not go out except by prayer and fasting
(Mark also chronicles this account yet Mark says Jesus only mentioned prayer.)
Mark 9:29 (included)
He replied, “This kind can come out only by prayer.”

And for good measure, a verse not on that original list:
Colossians 1:14
In whom we have redemption through his blood, even the forgiveness of sins.
The underlined portion is missing in modern translations. Does that mean modern versions maliciously leave out the importance of Jesus’ blood? No. We find the same message (with Christ’s blood included) in other passages of newer translations.
Ephesians 1:7
In him we have redemption through his blood, the forgiveness of sins, in accordance with the riches of God’s grace.
(Also Romans 3:25, Ephesians 1:7, Ephesians 2:13, 1 Peter 1:19, Revelations 1:5)

The following verses were also included on the list but none of these verses change the message that writer was conveying if they are not included:

John 5:4 For an angel went down at a certain season into the pool, and troubled the water: whosoever then first after the troubling of the water stepped in was made whole of whatsoever disease he had.
Acts 15:34 However, it seemed good to Silas to remain there.
Acts 24:7 But the commander Lysias came by and with great violence took him out of your hands.
Acts 28:29 And when he had said these words, the Jews departed, and had great reasoning among themselves

So, while some may hold a sense of allegiance to the KJV, the “missing” verses in other modern translations is due to evidence and archaeological discoveries which not only make the newer translations likely closer to the original manuscripts but it clearly doesn’t take away from theological meaning and message of Scripture! This is not to put down the KJV which is a great translation and has accomplished much for God’s kingdom but as believers, we must remember that God’s Word is perfect in it’s original form. There are good translations and there are better translations. Some versions convey certain passages better while others do a better job with other passages.

For information on picking out the best translation for you click here.

Theologetic Table of the Evidence

Be The Salt Of The Earth

Join other writers from various walks of life who have submitted topics of discussion or papers they have written to add to our site. Click HERE and help spread the news of Jesus through sound theology and apologetics today.